This document presents the (rather elementary) workflow common to Neper and FEPX (herein the program). The text is written specifically for users who would like to contribute to the program and for internal developers (and, ultimately, for maintainers). However, the workflow should be applicable to any other (average-size) program and so may also be of interest to the general reader. In the following, user denotes any user of the program, contributor denotes any user contributing code to the program, developer denotes an internal developer, and maintainer denotes whom has full power on the program - only developers and maintainers have access to the private repositories (and some links provided below). No particular background on collaborative software development is assumed.

Development is made with tools and procedures based on Git and GitHub. The program is made available on the Web as source code, and its development involves both public and private parts. The program has “official releases”, but development also follows the principles of continuous integration for what is the “stable” version of the program, i.e. new features such as bug fixes and small improvements are merged into the code as often as necessary, and tests are run systematically on the program to make sure that all capabilities remain operational and that the output does not change unexpectedly.

The program has no more that three spaces:

In addition to standard Git, developers use two scripts, neperfepx-git and neperfepx-release, as described below.

This description is general and does not consider the case of external contributions, detailed below, see Being a Contributor.

Branches are used to handle different versions of the code (stable, development, etc.), which are on one or both repositories. 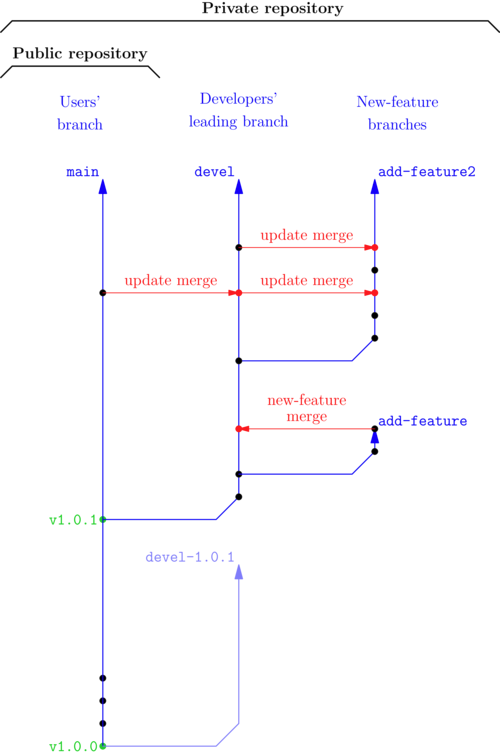 Branches and repositories of the program. Branches are shown in blue (archived branches in light blue), commits in black, merge commits in red, tags in green, and merges in red (note that add-feature itself is not a good branch name…).

Different branches are used for the different levels of development. In principle, all developments are merged into main on a new release.

Keeping branches up-to-date with the branches they are based on is important. The rule of thumb is that, on every new commit in main, main is to be merged in devel (this is the responsibility of who commits in main), and, on every new commit in devel, devel is to be merged into the new-feature branches (this is the responsibility of who owns the new-feature branch). This is done as often as necessary to avoid hellish Git merges.

In both cases, the merge keeps track of all commits of the new-feature branch, unless the --squash option is used.

The devel branch is merged into main only on new releases and using neperfepx-release, described below.

Version numbers are defined in a standard way, as <major>.<minor>.<patch> (see https://semver.org for a thorough discussion). Typically, patch versions (x.x.1, x.x.2, etc.) gather bug fixes and small improvements, minor versions (x.1.0, x.2.0, etc.) contain new features, and major versions (1.0.0, 2.0.0, etc.) are little revolutions, such as the addition of outstanding new features or global code overhaul. In the special circumstances where backward incompatibility is introduced, the new version should be either a minor or a major version. A new version number is automatically created on each commit. When not associated to a release, a version number is formatted as <major>.<minor>.<patch>-<releasecandidate> when in the main branch, and <major>.<minor>.<patch>-<branch_name>-<releasecandidate> when in a development branch (either devel or a new-feature branch), where patch is the next patch number and releasecandidate increments from 1 (whether the next release is a patch or minor or major release is generally not known in advance, and it will always be consideres that it is a patch release - this is generally not problematic, as the new version number will be defined at release). For example, considering only main, the versions immediately following 1.0.0 are 1.0.1-1 (“release candidate for 1.0.1”), 1.0.1-2, etc. and will eventually be part of 1.0.1 (or 1.1.0 if the next release happens to be a minor release, or 2.0.0 for a major release). On an official release, the version number is prefixed v to create a Git tag and GitHub release. Version numbering is automatically handled by neperfepx-git, described below.

Adding Code to the Program

The rule of thumb is that, on every commit, both the code and documentation should be kept up-to-date and consistent with each other, and so any changes or additions to the code should be documented as they occur. This helps maintaining good documentation.

Any commit should be done using neperfepx-git, which is a replacement for git dedicated to the program and that runs Git with the provided arguments, updates the version number and helps resolving merge conflicts. It should systematically be used, and it is a good idea to simply alias it as git to have it used by default: just add alias git=path/to/neperfepx-git to your ~/.bashrc file.

In the following, it will be assumed that neperfepx-git has been aliased as git.

Commit messages matter (to you now, as they help to structure development, to you in the future, and to others) and should not be neglected. Don’t be too anxious about it, but good formatting is important as well. We follow Torvalds’ directives and also this site. A good commit message looks like this:

As said in the second reference, imperative mood just means “spoken or written as if giving a command or instruction”, as in “Clean your room. Close the door. Take out the trash…”. You will see that it is actually used by Git itself, e.g. on merges (Merge ... into ...). Always starting by a verb (at the imperative) also proves to be a very good practice over time because you will find yourself often using the same verbs, such as Fix, Improve, Update, etc., which will make the commit purpose obvious. No full stop (“.”) at the end of the title line will allow you for one more character for actual text (as you are granted only 50 characters for this, remember…).

If a commit is related to a GitHub issue or discussion, make a reference to it (via its number) in the commit message. You can even end the message with, e.g., Closes #2. to get GitHub to automatically close the related issue (here, #2). However, Closes #2. certainly does not make a good commit title, as it says nothing about what the changes actually are (especially outside of the GitHub repository). Sometimes, it is useful to give the long issue number, which is formatted as <author>/<project>#<issue> (for example neperfepx/neper#42, neperfepx/neper-dev#46, neperfepx/FEPX#23, acmelab-ua/FEPX-dev#26, etc.).

Add the following code to your ~/.bashrc to have the current branch printed before the prompt symbol ($) in the terminal:

To start working as a contributor of the program, you need a GitHub account. You will create a fork of the official repository in your own GitHub space.

To make changes, a good practice is to:

Getting the Code as a Local Git Repository

First, you need to clone the code locally. To get the full code (and code history), you should clone the private repository:

(Depending on your system, you may get a warning: Pulling without specifying how to reconcile divergent branches.... In that case, run git config pull.rebase false (you will need to do this only once)).

If you have not done it before on your computer, now is a good time to tell Git who you are, as the information will be used by Git on new commits; you can also tell Git what your favorite editor is, as it will open on new commits:

Bug fixes and small improvements are simply published as new commits to main, in between official releases. Here is the workflow:

The main branch should be the same, at all time, on all repositories (public, private and local). As a new commit is pushed to main, users and developers will have to run git pull github main (or git pull github-dev main, for developers, which works equally well) to update their own versions - this is their responsibility.

Of note, as main is modified, the branches based on it should be updated, as described previously.

New releases are made typically every 2-3 months. This is done automatically, using neperfepx-release.

On a new release, devel is merged into main (which, in simple terms, makes the code that was in devel public). This is not done as a standard merge, however, but so that all developments appear as a single, “release” commit in main (using Git merge’s --squash option). In this way, the main branch is kept clean, while all “development” commits become archived in a branch named devel-<major>.<minor>.<patch> (the new version number).

On a new release, a Git tag and a Git release are created, and the website is updated with links to the new release and documentation.

The source codes of the website (Neper/FEPX) is in the gh-pages branch, and, when compiled using make html, generates html code in docs. The website sources can be updated at any time on this branch and compiled, and GitHub will seamlessly show the updated website. Synchronization generally takes no more than 30 seconds. On a new release, neperfepx-release updates the website automatically.