Module -T is dedicated to tessellation generation. Its primary capabilities are (i) the generation of tessellations from cell properties (statistical, e.g. a size distribution, or defined grain by grain), (ii) the definition of cell groups (to represent different material phases) and (iii) the generation of multiscale tessellations (i.e. including cell subdivisions). These capabilities can also be used together. Tessellations are composed of convex cells (Laguerre tessellations). Finally, the tessellations can be regularized to remove their smallest entities (edges and faces), which enables for good-quality meshing with module -M. Periodicity conditions can be prescribed. Crystal orientations are provided for the grains. The output is a tessellation file written at a scalar (vectorial) or raster format.

Tessellations are built in a finite domain of space. A unit cubic domain is used by default, but cylindrical domains and spherical domains are also available while other, arbitrary convex domains can be defined, as illustrated below. Tessellations can contain an arbitrary number of cells and can be 2D or 3D. Crystal orientations are assigned to the cells. Below is the generation of 1000-cell Voronoi tessellations (the default) in various 3D domains:

Tessellations can be of different types, depending on how seeds are defined, but are (almost) always composed of convex cells. By default, a Voronoi tessellation is generated, for which seeds have random positions (following a uniform distribution). If (experimental) morphological properties are provided for the cells as input, a Laguerre tessellation is generated for which the seed attributes are optimized so as to reproduce these properties. The properties can be statistical distributions (e.g. a cell size distribution) or defined grain by grain (cell centers, etc., including a full polycrystal image). The method has no particular limitations (except that it generates convex cells) and allows for the generation of a wide variety of microstructure morphologies.

Non-convex domains can be obtained by cutting a tessellation by one or several geometrical primitives, such as half-spaces, spheres, cylinders, elliptic cylinders, etc. The current implementation is limited to the case where the local curvature of the geometrical primitive is larger than the typical cell size, so, this remains an experimental feature. The resulting tessellations can be regularized and meshed just as standard, convex tessellations.

A wide array of statistics are available on the cells or even on the faces, edges, vertices and seeds. Morphology and topology properties are available. For example, the cell variables include: the centroid coordinates, the volume, the numbers and lists of vertices, edges and faces, the surface areas and equations of the faces, etc. An example of statistical analysis on a 300-cell tessellation is illustrated below. 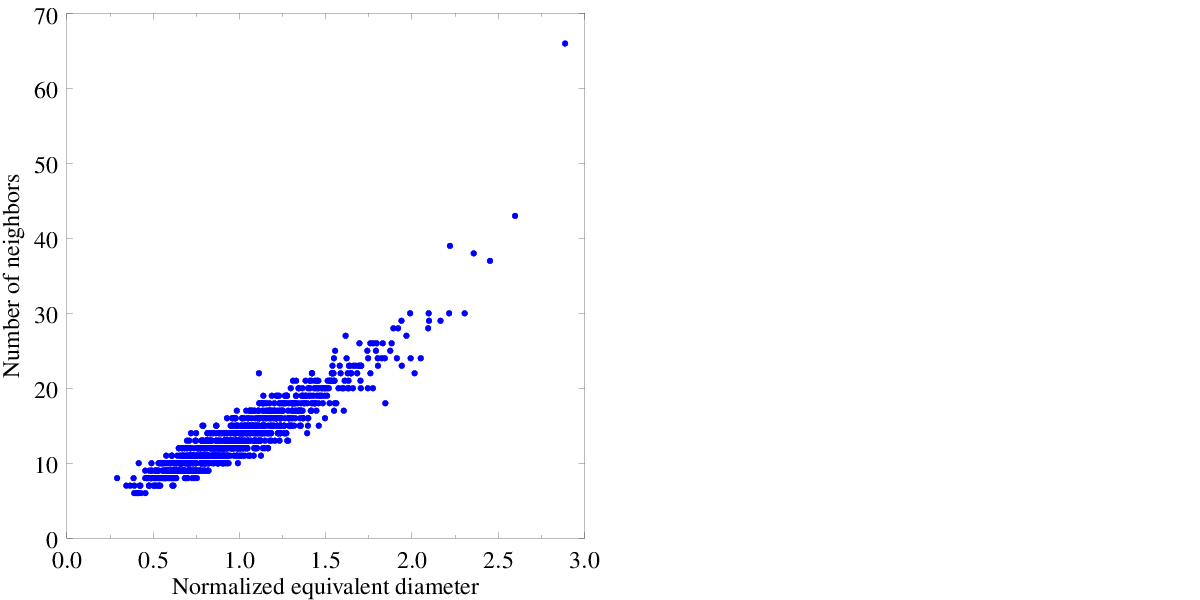